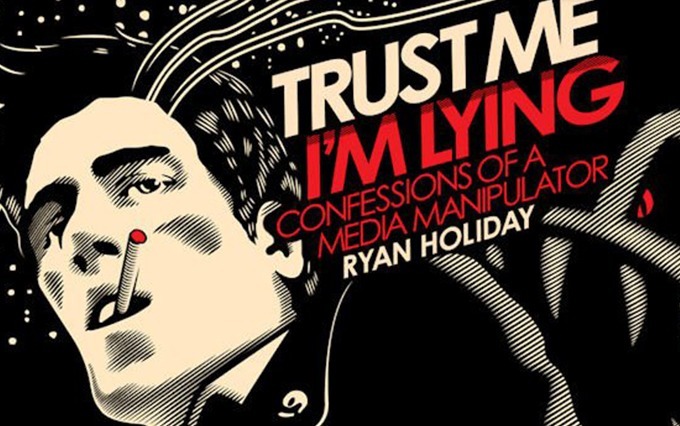 Breaking down how the media machine works at its core—especially online—it explores how the internet has exploded the atrocious way today’s news works.

This book especially contributes the problems to the way many of these media-related companies make money. They heavily rely on advertisement, and advertisement typically is paid on a per view basis. This means they’re incentivized to create news that gets the most views, rather than report on that which is most newsworthy.

Not only does it break this entire problem of the money-driven media machine down to its basic elements, but this it also shows you how to use it against itself. If you want to participate in the way this type of media works, you definitely can. It shows you how to manipulate the media in order to further your needs, or the needs of your clients, if you so choose. I’ve never read a book that does it more explicitly than this one.

This book is sort of two-fold. It gives you a framework to understand the media, while providing the tools necessary to manipulate it, if you so desire. Now, it’s important to understand that manipulation does not necessarily have a negative connotation. Sometimes you need to manipulate the media in order to further a positive endeavor.

This concept of ‘climbing up the media ladder’ is probably the most valuable tactic from this book. The idea is this: you can start low on the food chain. If you want to get on Forbes, or any of these bigger sites, it’s best to start low on the food chain, such as a small blog. You can send in a tip, news story, or an image from an email address, and make it very juicy. Those running the smaller sites are hungry—they’re lowest on the totem pole—so they want to cover things. You’re going to essentially stroke their ego by sending them something and saying, “Oh, I wanted to come to you first.” They’re going to pick it up.

A lot of other people will pick it up as well, so you can say, “Hey, we were already covered on a small blog.” You then send it over to a ‘medium’ blog, such as a city-wide blog, or a blog that’s a little bit bigger in that target niche. Once you get covered there, you can use all those credits and pitch it to bigger blogs like Huffington Post, Forbes, or Jezebel. They are paid on the basis of page views, so they often want proof that a story is going to do well before publishing it. What better way to give them proof, than showing them the social proof of other websites? These larger sites get a lot of their content from websites already covering the story.

I would focus on chapter three of book one. It’s definitely the most important as far as understanding the general idea of how publishers make money online. Then take a look at tactics one through five. Book one is actually the most important book, in my opinion. The rest of it lays out other foundational elements, which are not 100% necessary to know, but definitely worth a read.

I write about how to think and live better, as I see it. Previously Head of Marketing at Book in a Box.