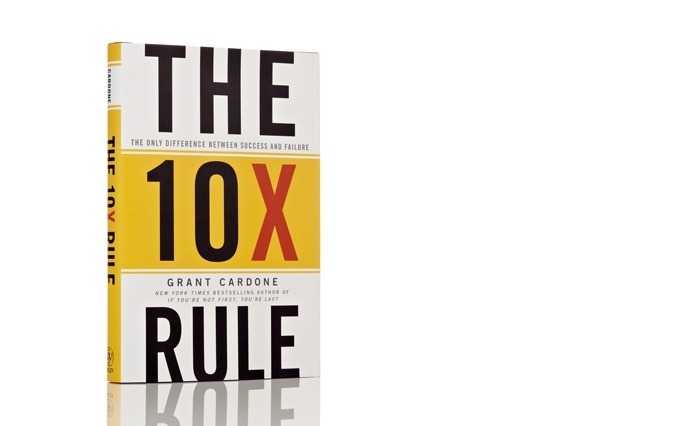 The 10X Rule: you need to shoot for the stars and adjust your goals accordingly, because the middle is just not going to cut it anymore.

It’s a pretty simple concept. Anything you’re thinking about doing, such as a goal you’re trying to reach in your life—whether that be business, personal, fitness, spiritual— just multiply it by 10. What does 10 X the result look like? Maybe you’re trying to make $1,000/month. Why not try to make $10,000/month? This concept changes the way you approach the problem in the first place.

It hearkens back to a lot of different books out in the business world, such as ‘The Dip.’ It claims that it’s best to just quit acquiring a certain skill if you know you’re not going to make it all the way through. Instead, work on something that you’re actually going to push through.

The 10X Rule is a bit different. It states that most people don’t make it through ‘the dip’ because of x, y, and z. All of the rewards are on the other side, and it’s not that hard to obtain. All you need to do is take 100% responsibility for your actions and effort.

People currently going after mediocre goals and receiving mediocre results. This book can jolt you out of that cycle.

It changes the way you think about things. Cardone says there’s really no such thing as competition when you’re going as hard as you can possibly go. He says that dominating your sector or industry by competing is not the goal. The goal is to dominate. You look at Google. They’re not really competing on being the best search engine anymore. They’ve already won that. They’ve effectively dominated search, and that’s because—in Grant’s world of The 10X principle—they went extremely hard. This book encourages you to get excited and keep that motivation going.

The biggest takeaway is this notion of multiplying your goals or results by 10X will change the way you approach a problem. The daily actions you take and the way you think about it changes, as you now become excited about a problem.

In chapter seven, Cardone describes various degrees of action. He states that—unless you’re taking massive action—you’re either going backwards or staying the same. He wants you to be on the side of massive action. He explains that most people are living in probably the first or second degree, because if you’re just keeping pace with inflation and not really moving up in the world, you’re actually moving downward, due to the way that the economy is changing.

If you’re managing to move forward, congratulations. You’re just one of the middle class, or perhaps even slightly upper middle class. His whole point is that the only way to get out is to take absolutely massive action on huge goals and push yourself to get there.