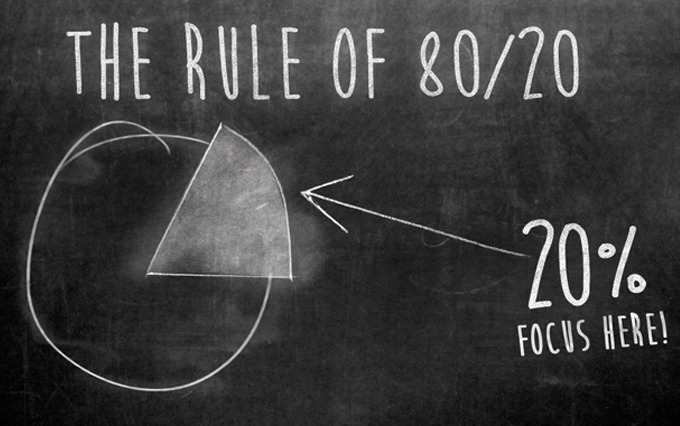 The Pareto principle, or the 80:20 rule, has become incredibly popular over the last 10 years or so, thanks to people like Tim Ferriss popularizing the concept outside of strictly business and economics.

It’s an incredibly helpful model to add to your toolbox, especially when you dive a little deeper than most on some of the ways you can apply it to your life, business, or the world at large.

Vilfredo Pareto is the original discoverer of the principle, though it wasn’t named after him until later after he was long gone. The origin story is as follows:

Essentially, Pareto showed that approximately 80% of the land in Italy was owned by 20% of the population; Pareto developed the principle by observing that 20% of the peapods in his garden contained 80% of the peas.  – Wikipedia

The simplest and most broad way to define the Pareto principle is this: most things – in all areas of life – have an uneven distribution.

Here are some examples:

However, many people seem to stick steadfast to the 80/20 percentage breakdown. That’s not the point of this principle. The point is that many phenomena in life tend to follow a power law distribution, or what is known as a Pareto distribution.

Also recognize that the numbers don’t have to be “80%” and “20%” exactly. The key point is that most things in life (effort, reward, output) are not distributed evenly – some contribute more than others.

A helpful thought experiment is to crank the ratio up as high as possible and apply it to a situation.

Let’s take the example of a popular article on Reddit. Participation in internet communities typically follows a Pareto distribution, but split into three different sections instead of two.  It’s known as the 90/9/1 rule and states that of the people that use a website (or see an article), 90% consume it passively, 9% interact in a small way, and 1% actively create and interact (comment, write a follow up post, etc).

The Pareto principle helps shine a light on why certain internet communities are the way that they are, especially when you layer a few psychological mental models on top.

Using the Pareto Principle In Our Lives

Because of the versatility of this principle, there are many ways to apply it in our lives. The simplest question to ask yourself is this:

“What is the smallest input that will bring the largest relative output?”

Imagine you want to lose 50lbs, but you’ve struggled with diet and exercise for as long as you can remember. A common strategy is to figure out the perfect exercise and nutrition plan, and doggedly commit to sticking to it until you get to your goal. Unsurprisingly, and for many different reasons, this usually fails.

Approaching the problem with the Pareto principle in mind, you might ask yourself:

In the first case, simply remove the offending food or drink. In the second, simply do that low effort exercise (for example, extremely obese people are encourages to just walk a mile or so per day and change nothing else).

Neither of these changes will result in losing those 50lbs, but they’re incredibly low-effort relative to their payoffs. That makes them easy to stick to when contrasted with the massive lifestyle changes that most people end up trying when they embark on a fitness journey.

When Not to Use the Pareto Principle

With any mental model, it’s important to not over-apply it. When we’re acquainting ourselves with a new concept, it’s natural to start seeing it everywhere due to our reticular activating system.  This can go haywire, making us attempt to apply a concept where it has no place being used.

The biggest takeaway the Pareto principle provides is the idea that most things in life are not distributed evenly.

While we should be seeking to invest our time in the highest output activities, the fact remains that for many things, we can’t just do 20% of the work for 80% of the result. Sometimes you need to grind out the last 20% – even if you’re suffering diminishing returns – to get the job done.

Building 80% of a car isn’t the best strategy, nor is completing 80% of your thesis.

For example, when building Book in a Box, we found that most of the process we use to take an author from idea to published book was done in a few weeks. But we’re still working on refining that process to 100% – and our client satisfaction and company growth are living proof of the need to iron out every last detail.

To close it out:

When you are seeking top quality, you need all 100%. When you are trying to optimize your bang for the buck, focusing on the critical 20% is a time-saver. See what activities generate the most results and give them your appropriate attention. – BetterExplained.com