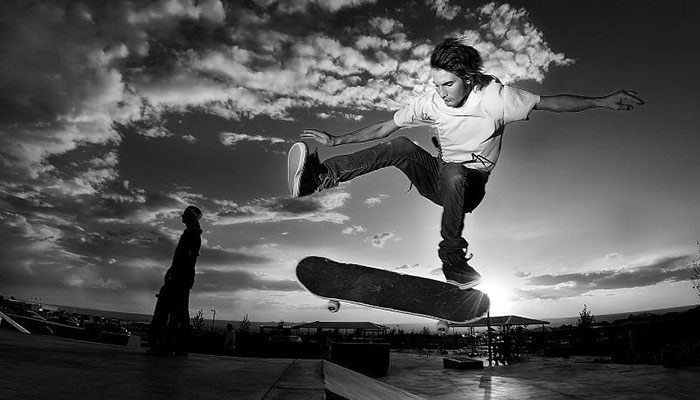 There’s a familiar, terrible feeling that every skateboarder knows well.

When you’ve mentally and physically committed to a trick – but only about 90% of the way – and you realize in mid-air that things are going to end horribly for you and there’s absolutely nothing you can do about it.

My moment was August 2010.  While skating around the local park with my brother, I decided to go for a trick that I really shouldn’t have tried, despite it being pretty simple for most intermediate skaters.

The trick is a frontside 5-0 grind – sliding along a surface (like a rail) while balanced on your back trucks.  If that explanation didn’t make any sense to you, just look at the picture. It’s one of the simpler grinds you can learn.

As I was skating around the park, I saw the perfect ledge for a 5-0.  I rolled up to the ledge, ollied, and proceeded to completely miss the ledge.  Normally this wouldn’t be a huge deal, but my foot was out of position. I landed on the side of my left ankle from four feet up in the air with the full weight of a 6’3″, 200lb body.

I heard a crack and my vision went black.  I thought I’d destroyed my ankle completely.  Fortunately, after an MRI and a few x-rays, it wasn’t broken, just severely sprained.

After a lengthy rehabilitation process, I’ve finally started to skate again…but this time I’m approaching it in a completely different way.  A way that I think can be applied to most motor-skill sports and a lot of other learned skills as well.

In my time off from skateboarding (and walking), I started to think deeply about why I kept hitting a wall in my progression.  I had a bag of tricks I could perform well, but anything more complex and I’d just hit a wall of failure over and over again.

What I realized after some serious contemplation was that I was going at skateboarding the entirely wrong way.  If I didn’t land a trick, I just tried it again – not a whole lot of thought in between the two attempts. This was just ‘the way it was done’ in skateboarding, where paying your dues by failing 1,000 times before you landed something once was the norm.

I needed to completely rebuild the way I skated in order to:

Every skater knows this on some level.  We learn how to ollie, then 180, then a shuv-it, then a kickflip or a heelflip. There’s a natural progression.

I realized that I was not absolutely mastering the basics before I got into the more meaty moves.  I kept trying to build on poorly laid foundations.

Still, this seems a little obvious.  Let’s take it to the next level.  What makes a trick, a trick?  In skateboarding, there are 6 distinct steps in any trick:

If you can identify exactly what type of mistake you’re making and where in the trick you’re making it, you’ll already be far ahead of most skateboarders that just blindly brute-force their way into learning a new trick.

The best part? A lot of these mistakes carry over to similar tricks and as you correct more of them, new tricks become easier to unlock.

How many times have you seen a video titled “Kickflip Trick Tip” that goes like this:

Yeaaaaaa, so what you’re gonna wanna do is take your feet and put ’em on the board like this…you know, like a kickflip position.  Then kinda just pop your ollie, slide your foot off right near the pocket, and then just sorta stay above it.  When you see it come around, stomp it, land it, and ride away.  That’s just about all there is to it.

These types of trick tip videos are everywhere, and they’re completely useless.  All that’s happening is you’re watching someone else do a kickflip and explain in a terrible way how they’re doing exactly what they’re doing.

It’s like defining “eloquent” by saying “it means something that’s eloquent.”  Not very insightful.

Since I’ve started skating again, I’ve absolutely mastered every trick that I’ve ever been able to do. My consistency on these tricks nears 100%.  New tricks that I’d never even come close to in the past, like a 360 flip or frontslide flip were learned in a matter of weeks.

I haven’t become some god of skateboarding, but I’ve gotten a hell of a lot better than I ever was ‘in my prime.’ The best part? All of this happened while skating only 60-90 minutes a day, instead of the hours upon hours I used to spend in my younger years.

By deliberately trying to understand all of the variables that go into a successful trick, I’ve massively sped up my progress in the sport.  There are so many things to consider when learning a new trick and it’s often a matter of finding the 1-2 places you’re making critical mistakes that will plug up all of your leaks and lead to you landing tricks consistently.

Here’s an example: Imagine you’re learning that 5-0 grind that I wrecked myself trying.  Here are just a few things to consider if you’re having trouble:

There are many more questions you can ask yourself based on exactly what’s going wrong when you try a trick. This is just an example of the questions running through my mind as I was breaking down and learning tricks faster that I’d ever done before.

Break a skill down to its fundamental parts.  Figure out every step that goes into the skill you’re trying to learn, then pinpoint every way each of those steps can fail.

After that, work on the skill – but in between each attempt, you can evaluate exactly where you failed in the process, and what specific mistake you made.  Then you can try again, armed with a tiny bit more knowledge.

By doing this, you’re guaranteeing that you’ll make some minuscule amount of progress each attempt as opposed to long bouts of no progress and then small jumps here and there.  By improving a tiny bit every single time, you’ll compound your growth much faster.