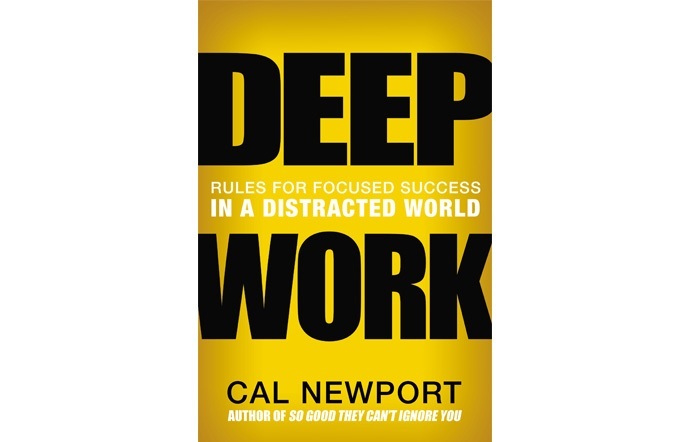 Do you feel like you’re getting much done in your workday? Even if you said yes, how impactful is the work that you’re doing? Are you spending at least a portion of your days in deep focus, working on projects and tasks that create lasting value for you or the company you work for? Or do your days become cluttered with short, repetitive tasks that are more reminiscent of moving information around instead of outputting value?

The average knowledge worker that answers those questions honestly will not like the answers. It’s nothing to be ashamed of – at least in the view of Cal Newport, the author of Deep Work. Hyper-connectivity and distraction are the root of the problem – but we are to blame for being dragged down by them.

I read Deep Work, funnily enough, in what Cal would call a block of deep work itself. I estimated how long it would take to read and scheduled it into my calendar, then I sat down and read. And read. And read. I finished the book in a day and pulled quite a bit out of it. Here’s what I got.

If it wasn’t already obvious, Cal puts forth the idea of deep work, and defines it as:

…the ability to focus without distraction on a cognitively demanding task. It’s a skill that allows you to quickly master complicated information and produce better results in less time. Deep work will make you better at what you do and provide the sense of true fulfillment that comes from craftsmanship. In short, deep work is like a super power in our increasingly competitive twenty-first century economy.

The problem, he argues, is that the average (or even above average) knowledge worker is nowhere close to this idea, even if they think they’re doing a good job. He uses himself as an example, noting that even when he was years into the practice of deep work, the act of writing this book forced him to go even deeper into the topic itself. In the same year he wrote the manuscript for Deep Work, he also put out 9 peer-reviewed papers. The year before? He put out 4 – and didn’t even write a book.

Shallow Work: Noncognitively demanding, logistical-style tasks, often performed while distracted. These efforts tend to not create much new value in the world and are easy to replicate.

The larger point to pull out of this dichotomy is that there are a few archetypes of workers that will thrive in the future, and none of them fill their days with a lot of shallow work. As Tyler Cowen says, “The key question will be: are you good at working with intelligent machines or not?”

So, does everyone need to completely rearrange their lives and schedules to start going deeper in work? Not everyone, says Cal. Let’s look at a CEO:

A good chief executive is essentially a hard-to-automate decision engine, not unlike IBM’s Jeopardy!-playing Watson system. They have built up a hard-won repository of experience and have honed and proved an instinct for their market. They’re then presented inputs throughout the day—in the form of e-mails, meetings, site visits, and the like—that they must process and act on. To ask a CEO to spend four hours thinking deeply about a single problem is a waste of what makes him or her valuable. It’s better to hire three smart subordinates to think deeply about the problem and then bring their solutions to the executive for a final decision.

How does Cal know?

If you know anything about Cal, you know he’s a value output machine. From his blog, to his professorship, to his papers, it seems that he produces a deluge of high-value work every single year. Here’s how he summarizes his work:

As a longtime devotee to depth, I’ve been able to publish close to 50 peer-reviewed papers as an academic (earning over 2500 citations), write five books as an author (selling over 200,000 copies), and build a popular blog (300,000 page views last month) — all without working at nights and rarely working on weekends. The secret is my fanatic commitment to deep work.

Why should you care?

Here are a few choice quotes from the book outlining why deep work matters:

The second reason that deep work is valuable is because the impacts of the digital network revolution cut both ways. If you can create something useful, its reachable audience (e.g., employers or customers) is essentially limitless—which greatly magnifies your reward. On the other hand, if what you’re producing is mediocre, then you’re in trouble, as it’s too easy for your audience to find a better alternative online.

Though an increasing number of people will lose in this new economy as their skill becomes automatable or easily outsourced, there are others who will not only survive, but thrive—becoming more valued (and therefore more rewarded) than before.

What should you do?

If you’re committed to deep work, the first thing to do is figure out your deep work philosophy:

Chances are good that if you’re the average knowledge worker, the rhythmic philosophy is the way to go. Here’s an example of a typical implementation:

It was the glacial writing progress during this year that drove Chappell to embrace the rhythmic method. He made a rule that he would wake up and start working by five thirty every morning. He would then work until seven thirty, make breakfast, and go to work already done with his dissertation obligations for the day. Pleased by early progress, he soon pushed his wake-up time to four forty-five to squeeze out even more morning depth.

After you decide on your working philosophy, you must ruthlessly commit to scheduling deep work blocks into your calendar and sticking to them. The process may seem foreign and difficult at first, but over time your brain settles in and starts to make meaningful progress on work that simply cannot be completed in shorter periods of time.

You must commit to working deeply, but simultaneously commit to disengaging completely:

Idleness is not just a vacation, an indulgence or a vice; it is as indispensable to the brain as vitamin D is to the body, and deprived of it we suffer a mental affliction as disfiguring as rickets… it is, paradoxically, necessary to getting any work done.

…shutting down with a strict shutdown ritual that you use at the end of the workday to maximize the probability that you succeed. In more detail, this ritual should ensure that every incomplete task, goal, or project has been reviewed and that for each you have confirmed that either (1) you have a plan you trust for its completion, or (2) it’s captured in a place where it will be revisited when the time is right. The process should be an algorithm: a series of steps you always conduct, one after another.

Surprisingly, disengaging from work completely and focusing on other pleasures can move you further forward in your work endeavors than grinding out more hours:

The scientific literature has emphasized the benefits of conscious deliberation in decision making for hundreds of years… The question addressed here is whether this view is justified. We hypothesize that it is not.

On top of that, it’s possible to do a restorative activity, like taking a walk in nature or going for a run and make forward progress on your problems. Cal calls this productive meditation, and describes it here:

The goal of productive meditation is to take a period in which you’re occupied physically but not mentally—walking, jogging, driving, showering—and focus your attention on a single well-defined professional problem. Depending on your profession, this problem might be outlining an article, writing a talk, making progress on a proof, or attempting to sharpen a business strategy. As in mindfulness meditation, you must continue to bring your attention back to the problem at hand when it wanders or stalls.

Finally, for those that think the deep work philosophy is too restrictive, too scheduled, and leaves no time for freedom, Cal bakes in a clever backdoor:

I maintain a rule that if I stumble onto an important insight, then this is a perfectly valid reason to ignore the rest of my schedule for the day (with the exception, of course, of things that cannot be skipped). I can then stick with this unexpected insight until it loses steam. At this point, I’ll step back and rebuild my schedule for any time that remains in the day.

More: Deep Work: Rules for Success in a Distracted World